You are here: Home / Resources / Insights / Young Women of Color Break the...

Young Women of Color Break the Silence. Now What? 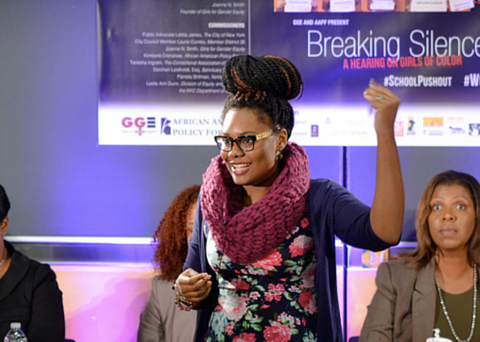 NEW YORK (WOMENSENEWS)–The pain of the grand jury’s decision last week to not charge Darren Wilson, the police officer who fatally shot Michael Brown in Ferguson, Mo., was just compounded by what happened here in New York. Another grand jury decided on Dec. 3 to not bring criminal charges against Daniel Pantaleo, a police officer who used a chokehold to restrain Eric Garner, an unarmed black man who died after the confrontation. These incidents are tipping points for community organizations such as ours, Girls for Gender Equity.

We have led Brooklyn’s Hands Up solidarity protest for all victims of state sanctioned and gender based violence.

As we demand justice for all, we take a stand for the girls and women overlooked by the media. One recent example: The manslaughter charges against Officer Joseph Weekley from Detroit that were dropped on Nov. 30 for the shooting and killing 7-year-old Aiyana Stanley-Jones while she slept. Another: Tanisha Anderson, a mentally ill Cleveland woman was killed on Nov. 13 after police used a takedown move outside her family’s home.

How We Can Help Black Female Students

We Deserve Better: A Report on Policing in New Orleans
Scroll to top