The school-to-prison pipeline affects girls of color, but reform efforts pass them by

You are here: Home / Resources / Insights / The school-to-prison pipeline ... 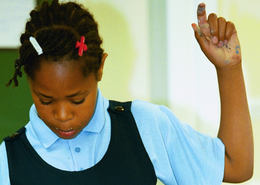 Despite the statistics, there are no initiatives like the My Brother’s Keeper program – a five-year, $200m program initiated by President Obama to support boys of color – to engage and nurture young women of color. Even though black girls are criminalized and brutalized by the same oppressive system, rarely does their brutalization make national news.