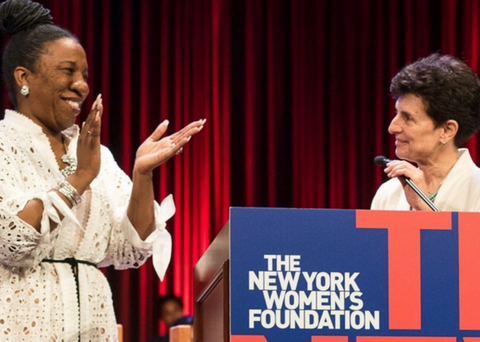 As the global conversation on gender-based violence continues to gain momentum, the New York Women’s Foundation is stepping up to fund more of this unprecedented social change in the U.S. On May 10 at a breakfast celebrating women leaders, Foundation President and CEO announced the   launching of a fund in collaboration with Tarana Burke, Founder and Leader of the #MeToo Movement, which will continue the work of ending sexual violence.

With New York Attorney General Eric Schneiderman’s resignation being the latest example of how the #MeToo movement is impacting society, the New York Women’s Foundation will help pick up the pace of this work’s impact with $1 million in seed funding, as well as ongoing efforts to build further philanthropic investment in the new fund.

“The #MeToo movement has given women hope that, finally change is within reach,” said Ana Oliveira, President and CEO of the New York Women’s Foundation. “Now we must support the movement in reaching its goals of justice and healing so that no woman is overlooked—especially cis and trans women of color and women living in poverty.” Oliveira described Tarana Burke as an “indomitable leader” who will assure the #MeToo movement’s continued impact.

Gender-based violence has been on the radar of the New York Women’s Foundation since its inception 31 years ago. The new #MeToo Fund will  be based in New York City and co-chaired by Tarana Burke and the Foundation.  The fund will dedicate its strategy to addressing sexual violence, particularly in underserved communities, with a particular emphasis on “the healing and leadership of survivors and promoting gender and racial justice.”

“We are thrilled to be partnering with The New York Women’s Foundation to create this Fund,” said Tarana Burke. “Our work started out as a grassroot community-based effort and grew into a global network of survivors and advocates working to interrupt sexual violence and ensure that survivors have access to the tools they need to sustain a healing process. This Fund will go a long way to not only support our ongoing work.”

Read the full story on PhilanthropyWomen.org.