No Longer Invisible: More Black Girls in DC are Being Criminalized

No longer invisible: More black girls in DC are being criminalized 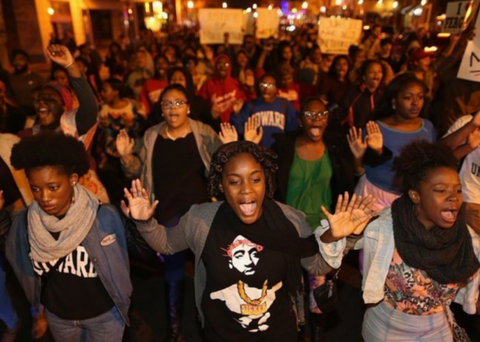 WASHINGTON — Young black girls in D.C. are 30 times more likely to be arrested than white girls and boys of the same age, a new study shows.

Rights4Girls and the Georgetown Juvenile Justice Initiative noticed a concerning national trend: More girls today have had brushes with the juvenile justice system than girls in previous years, while the statistic for boys has dropped.

These girls are typically arrested for nonviolent offenses and misdemeanors that result in little to no injury — things such as truancy, running away, liquor law violations and disorderly conduct.

And while black girls are only 14 percent of the general population, 33 percent are detained and committed.

With this information, co-authors Yasmin Vafa and Eduardo Ferrer wondered about local trends.

“We knew from the conversations we were having with public defenders, with young girls themselves in D.C., that this was probably true of what was happening locally, and so we wanted to do this report. And what we found was, in many cases, the findings were even more staggering for young girls in D.C.,” Vafa, co-founder and executive director of Rights4Girls, said.

In 2007, one in seven arrests of youth were girls. Since 2013, the trend has ticked upward: More than one in four are girls, according to the study. That’s an 87 percent increase.

Meanwhile, arrests for boys dropped 22 percent in the same period.

They’re also entering the system at younger ages than boys.

Within the black community, arrests of young black girls doubled, while arrests for young black boys only increased 6 percent (though they are still more likely to be arrested than their female counterparts).

Arrests for kids reported as white decreased in the same period.

The study didn’t break down arrest rates for other minorities in the D.C. area.

It should be noted that the population of females between the ages of 12 and 24 in the District are primarily girls and young women of color — 67 percent. Of that percentage, black girls make up 50.4 percent.

Listen to and read the full story on WTOP.com.

Summit On Gender-Based Violence Aims To Improve Safety For Women And Girls Of...

OpEd: We Must Create Financial Support for Child Abuse Survivors of Color
Scroll to top