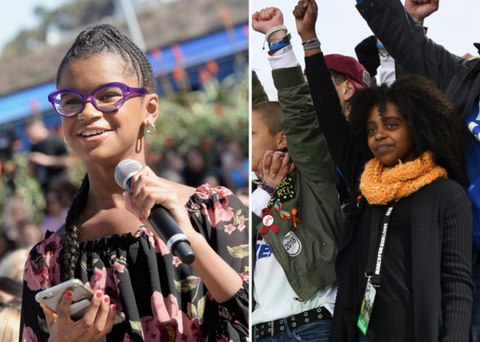 Two young black activists are using their voices to bring attention to the girls like them who have long been silenced for too long. In an Elle interview with 13-year-old Marley Dias, Naomi Wadler, the 11-year-old March for Our Lives activist whose speech went viral, delivered a searing and saddening take on how the media portrays young black girls like her.

Marley is the founder of #1000BlackGirlBooks, an initiative to bring more books featuring black female protagonists to black girls. She asked Naomi how she first learned about systematic oppression. Naomi said she picked up on it by watching CNN at home.

“We always have CNN playing in the background at home, so I would listen to the news, and I would listen to how reporters would identify suspects as black, but never point out they were white,” Naomi said. “That seemed like a stereotype to me.”

It’s not the first time Naomi has criticized the media for its coverage. She’s been the subject of national attention after she called out the media’s erasure of black women and girls in the conversations around gun violence at the March for Our Lives. Coverage of the March had been criticized from both within and without as headlines often focused on white youth as opposed to the communities of color largely affected by gun violence.

Ahead of the event, Naomi organized a walkout of more than 60 students at her Virginia school to stand in solidarity with March for Our Lives and she took an extra minute to honor Courtlin Arrington, a 17-year-old black girl who was shot and killed by a classmate in Alabama on March 7.

Naomi told Marley why she works to center black women and black girls in conversations about a variety of issues. “I noticed how black girls who were raped or killed or [died by] suicide — they didn’t get trending Twitter hashtags, they didn’t get retweeted millions of times,” she said. “I would tell somebody I felt terrible about it, and they’d be like, ‘Who?’” She went on to stress the importance of the representation in media for black girls not just around gun violence and sexual assault, but in positive ways that treat them like human beings.

“When black girls see themselves on TV shows and in news articles, they’re often oversexualized or made to look angrier than they are,” she said. “That’s how they lose their self-worth — because they see those stereotypes about themselves every day.” Through their activism, Naomi and Marley are breaking down those stereotypes and uplifting their communities all while balancing school. But Naomi told Marley that even at school, she can’t escape racism.

“Once, in third grade, a boy and I were playing a game, and he said how I should be the slave or the beggar woman because I’m black, so I can’t have money,” she remembered. “I’m Jewish, too, and that same boy told me that I can’t be a black Jew because there aren’t black people who are Jews.” Estimates of America’s black Jewish population vary from 50,000 to 500,000, but were as high as 200,000 in 1998, according to Robin Washington of the Alliance of Black Jews.

OpEd: We Must Create Financial Support for Child Abuse Survivors of Color

Discussing strategies to protect our women and girls at March 31 ‘Summit Against...
Scroll to top