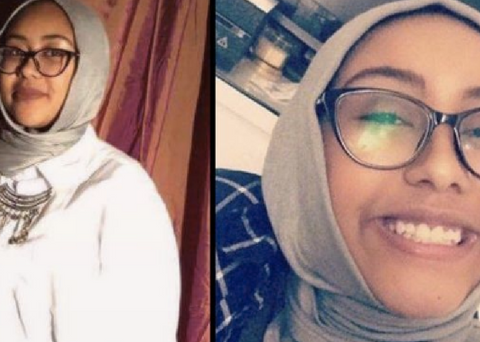 Nabra Hassanen didn’t have the chance to spend Father’s Day with the man who raised her. Hassanen’s remains were found in a pond in Sterling, Virginia, the Washington Post reported. She was 17.

Hassanen and her teenage friends — all wearing abayas, or traditional long dresses — were walking back after their pre-fast Ramadan meal at an IHOP early Sunday morning when they were accosted by a man in a red car. The man, armed with with a metal baseball bat, then got out of the car. The girls all ran back to the All Dulles Area Muslim Society mosque in Sterling where they were making their nightly Ramadan prayers. But Hassanen fell behind. She was beaten to death with the bat. The Fairfax Police Department identified the man as Darwin Martinez Torres, and he was charged with murder. The police said they had come across no indication that Hassanen’s death was motivated by her race or religion.

Recently, there have been a string of reported assaults and harassments in which Muslim teenage girls have been targeted. Earlier in June, it was reported that a police officer at a Minnesota high school used excessive force on a female Muslim student after a male classmate taunted her and called her a “fucking terrorist.” The officer reportedly handcuffed the student and removed her hijab.

Then on June 5, a white man verbally harassed five Muslim teenage girls after they broke their fast at Pepe’s Mexican Restaurant in Hickory Hills, Illinois. As the girls walked out of the restaurant, the man shouted “if you don’t like this country, leave.” When one of the girls responded by saying that the United States is her own home too, the man jumped out of his seat and started hurling anti-Muslim slurs at the girls.

At the start of Ramadan, noted white nationalist Jeremy Joseph Christian accosted two teen girls and hurled anti-Muslim epithets at them while riding on a Portland, Oregon, light rail train. One of the girls was wearing a hijab. Christian stabbed three men — Ricky Best, Taliesin Namkai-Meche, and Micah Fletcher — when they stood in defense of the girls. Best and Namkai-Meche died. Fletcher survived the knife wounds.

“They lost their lives because of me and my friend, and the way we look,” Destinee Magnum, one of the girls, said.

Hassanen’s death and the recent events involving Muslim teen girls have shaken the Muslim American community to its core. Several Muslim teenage girls said their parents have had sobering conversations about the dangers of being visibly Muslim in American society.

Sirad Hassan, 18, said that being a young black Muslim woman “has always historically been at the enclave of discrimination in American history — not just in Trump’s America.” It’s been a topic of discussion with her parents as long as she can remember.

Read the full article on Mic.com.

Sex Trafficking’s True Victims: Why Are Our Black Girls/Women So Vulnerab...