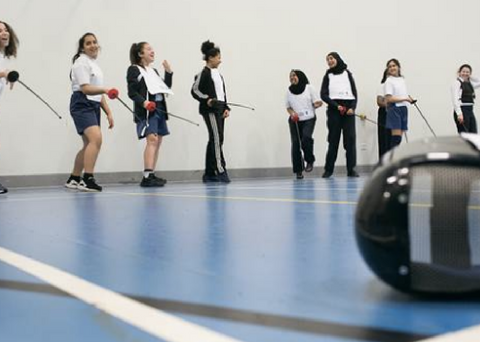 LONDON — A gaggle of London adolescent girls watches with awe at each forceful move and nimble footstep of fencing coach Linda Strachan. And then it’s their turn.

Their tentative steps are soon transformed into confident swoops of the sword and cathartic shouts as they lunge toward their opponents.

The first-time fencers are taking part in an open house aimed at extending the reach of a project working to skewer misconceptions about Muslim women.

Muslim Girls Fence, a joint initiative between British Fencing and the Maslahacharity, uses the sport to try and instill self-confidence in young Muslim women and present an alternative picture of them to the world. While the program focuses on young Muslim tweens, non-Muslim girls can also participate.

The club is turning heads.

For the potential new recruits, Strachan’s dexterous moves are mesmerizing. The day is a fusion of activity and theory — fencing sessions followed up with classroom discussions by Maslaha about Muslim identity, assimilation and stereotypes.

“Being someone who wears a headscarf, many stereotypes are thrown towards me,” explains Sarah Saeed, 13, a talented athlete who is on the school basketball team.

“When I was in primary school, my PE teacher was handing out letters for [soccer] club and I asked him why he hadn’t given me one and he said that he knew my parents would say no anyway because I was a Muslim and they were too strict to let me come to practice.”

“The images we see everyday of Muslim women in the press, in the media, it’s a one-dimensional image,” Akay said. “It’s one kind of vision of what a Muslim is, what a Muslim woman can be.”

Read the full story and see video coverage on NBCNews.

We Can Only Be Stronger Together When We Recognize Black Women’s Chal...

The Invisible Girls of Pokémon Go
Scroll to top