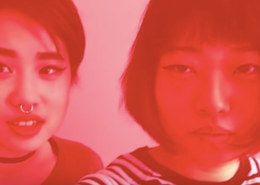 When you think of an Asian woman, what comes to mind? A tiger mom? An anime fantasy? A manicurist talking about you in another language? For Asian women, these stereotypes are frustrating, disheartening and downright depressing.

Instead of letting those feelings fester and rot internally, Rhode Island School of Design students Olivia Park and Esther Fan decided to do something constructive. Late last year, they started Sad Asian Girls Club, a collective of Asian-American girls aiming to break the culture of passiveness and silence through discussions of racism and feminism, providing more representation for Asian girls of all types and backgrounds around the world.

While technically the collective consists of just Fan and Park, Sad Asian Girls Club has evolved into a community in the most modern sense of the word — a stark red, black and white-tinted place they’ve carved out online on Tumblr, Instagram and YouTube. The Internet is where you can find vitriol and hate in abundance, but it’s also where you can find empathy and solidarity from people who’ve had the same experiences as you.

So who is the “Sad Asian Girl”? According to Fan, “She’s any Asian individual identifying as female who is struggling to fit into some kind of mold perpetrated by both Western society and Asian society. There are different expectations from both sides that we constantly have to choose between or just be isolated by both.”