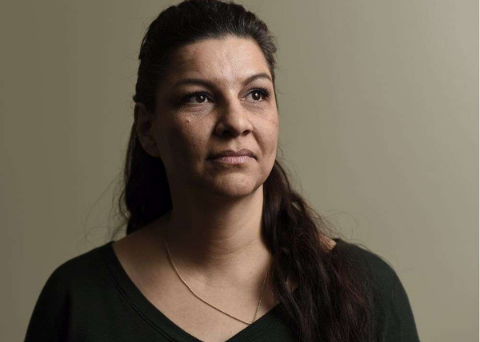 The daughter of a residential school survivor, she was placed into care at seven months, then at four adopted into a middle-class white household where she reckoned with racism and abuse.

“I was always being made aware of the colour of my skin and that it was a bad thing,” Wallace-Littlechief recalls. After standing up for herself at the age of 13, she was moved into a group home, where she was called Apple — “white on the inside and brown on the outside,” she says. She never felt accepted.

Wallace-Littlechief eventually ran away from the home. Within half an hour, she was drugged and raped, she said.

“I ended up in this home where they’re injecting me with drugs and fixing my hair and telling me how beautiful l am. They were grooming me and I soaked it up,” she said. “ I considered it love — that was the only love that I had ever experienced. They cared for me and I felt so privileged that these adults were wanting to be my friend and look after me.”

By the age of 14, she was working on the streets.

Read more at The Star Phoenix.

Why so many Latina teens in Philly have attempted suicide