How To Help Cyntoia Brown, A Sex Trafficking Victim Who Was Sentenced To Life In Prison As A Teen

How To Help Cyntoia Brown, A Sex Trafficking Victim Who Was Sentenced To Life In Prison As A Teen 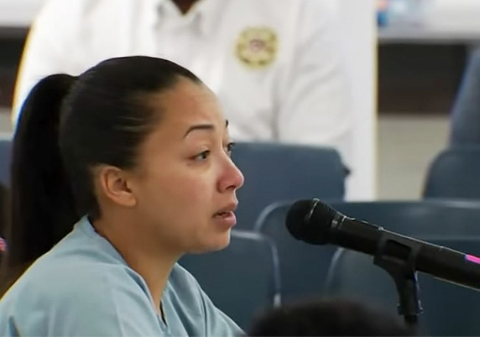 Cyntoia Brown was 16 years old when she was convicted of first-degree murder and sentenced to life in prison in 2006. Now she must serve 51 years behind bars before she’s eligible for parole, the Tennessee Supreme Court ruled on Dec. 6, as The Tennessean reported. But this case isn’t as cut and dry as it might appear on the surface; Brown is a sex trafficking victim who claims she acted out of self-defense. If you’re upset about the ruling and wondering how you can support her now, here’s how you can help Cyntoia Brown.

Brown, a Tennessee native, was placed in the foster care system when she was a baby, according to People. Brown later found an adoptive family, but she became a teen runaway at 16, eventually going to live with her 24-year-old boyfriend who was known as “Kut Throat” in 2004, according to Rolling Stone. Brown claims Kut Throat repeatedly raped her and forced her into prostitution, a dangerous situation that came to a head on the night of Aug. 6, 2004. Brown claims Kut Throat forced her to solicit sex, which is how she met 43-year-old real estate agent Johnny Allen, according to HuffPost.

Translation: Since Brown’s prison sentence is 51 years (her sentence was reduced due to model behavior, according to The Atlanta Journal-Constitution) it’s technically constitutional under state law. Brown’s case is now headed to the U.S. Sixth Circuit Court of Appeals, where this new opinion will be heard, as The Tennessean reported.

Not only is it upsetting that Brown is facing further punishment because she reduced her own life sentence for good behavior, but it’s incredibly troubling that a sex trafficking victim is in this predicament to begin with. Sex trafficking victims, especially those who are forced into it as children, should never be treated like criminals.

So here’s how you can help Brown’s case.

Smashing the patriarchy: leading and learning from girl activists