You are here: Home / Resources / Updates and Newsletters / Goldman Sachs One Million Blac... 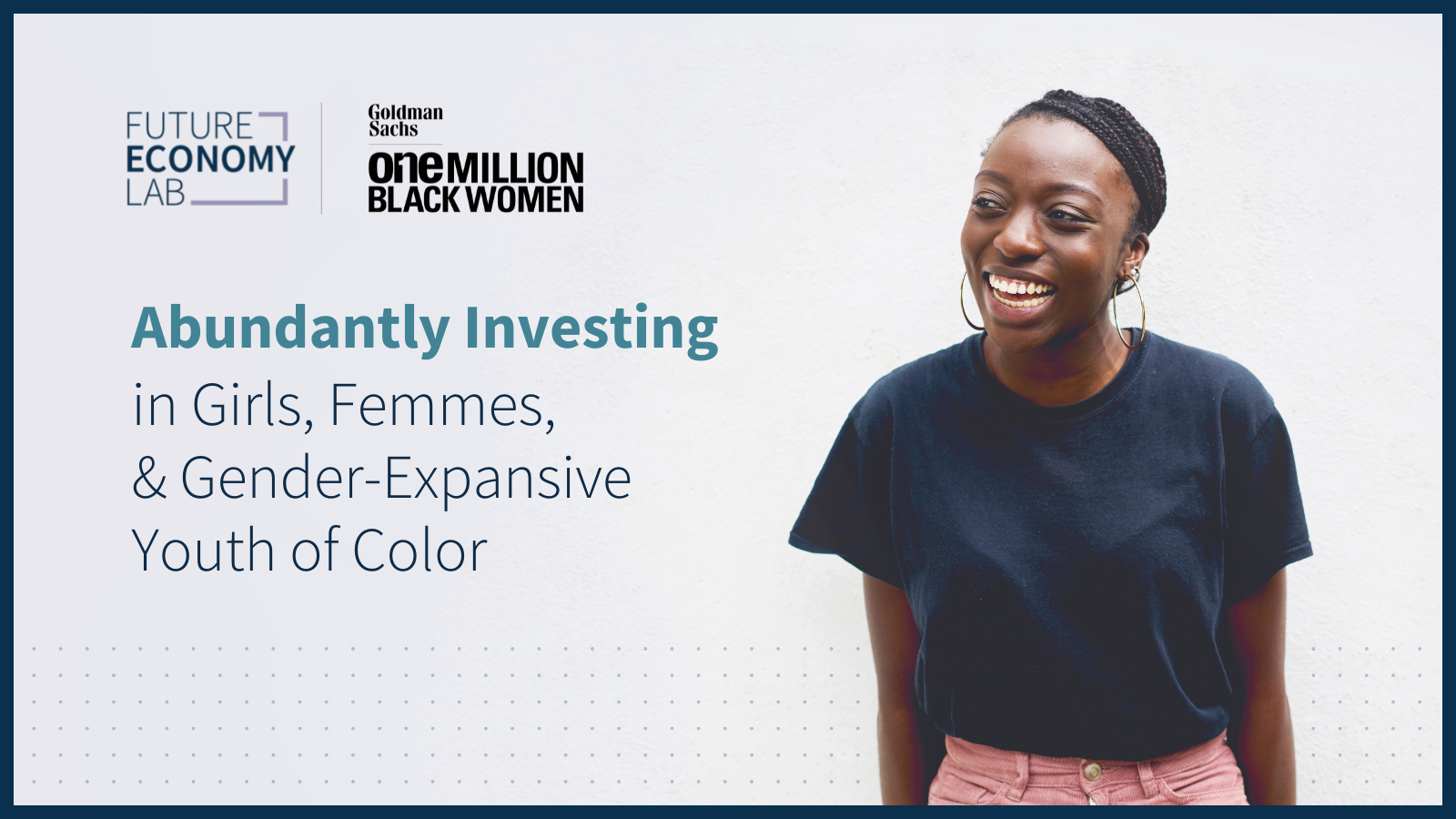 In partnership with girls, femmes, and gender-expansive youth of Color, the project will create new financial tools to drive investments into communities of Color

NEW YORK —Aug. 1— The Future Economy Lab: Abundantly Investing in Girls, Femmes, and gender-expansive Youth of Color, a joint lab between Grantmakers for Girls of Color (G4GC) and SecondMuse Capital, today announced a $500,000 investment from Goldman Sachs kicking off the start of Black Philanthropy Month.

“We are thrilled to receive this investment for the Future Economy Lab, which is an opportunity to engage Black girls, femmes, and gender-expansive youth in the economic development and financial literacy efforts from which they have been historically marginalized, while shifting the narrative about the capacity of our young people to be effective leaders in financial spaces,” said Dr. Monique W. Morris, President and CEO of G4GC. “As our first significant financial industry partner in the lab, Goldman Sachs—through their mentorship and guidance to Black girls, femmes, and gender-expansive youth—will also expand the possibility of how philanthropy and the financial sector work together to co-create strategies for the economic wellness of our richly diverse Black communities.”

The Future Economy Lab will target unmet needs and barriers faced by girls, femmes, and gender-expansive youth of Color, as well as the assets they hold to help create an equitable economic system.

“Humanity is in desperate need of the minds of girls, femmes, and gender-expansive youth of Color to open up the possibilities to imagine new, innovative financial mechanisms that benefit

people and the planet,” said Todd Khozein of SecondMuse Capital. “With the creation of this fellowship, together, we will be able to articulate what abundant economies are, and create meaningful and lasting change not only for them but also for their communities and the country.”

The lab will consist of a fellowship and an advisory group of girls, femmes, and gender-expansive youth of Color, ages 13 to 24, who will engage in a year-long series of workshops and design-thinking sessions. They will share their own expertise as young and active participants in the economy, and engage directly with stakeholders, including leaders in the financial sector and social movements, to achieve economic inclusion and equity.

“We are proud to partner with Grantmakers for Girls of Color and SecondMuse Capital to advance our shared goal of driving economic empowerment and inclusive growth,” said Asahi Pompey, President of the Goldman Sachs Foundation. “Giving Black girls the opportunity to shape and contribute to the broader economy is a smart investment that will drive strong returns for generations to come.”

About Grantmakers for Girls of Color:

Fiscally-sponsored by Rockefeller Philanthropy Advisors, Grantmakers for Girls* of Color (G4GC) works to mobilize resources and amplify transformative organizing work to dismantle systems of oppression led by girls, femmes and gender-expansive youth of Color. Grantmakers for Girls of Color openly invites partners and stakeholders to co-create an inclusive space in support of girls, young women, and gender-expansive youth of Color across programmatic issues and geographic areas. Learn more by visiting GrantmakersforGirlsofColor.org.

SecondMuse Capital designs and manages investments to build economies of the future which protect and preserve the planet, benefit people from all cultures and communities, and incentivize innovations that contribute to economic resilience and sustainability. Whether alone or with partners, SecondMuse Capital manages and designs investment funds that are good for people and the planet and that return value to both investors and the communities they’re supporting. We design with and not for the community to fundamentally rethink and challenge the mechanics of financial instruments and investment vehicles. Learn more by visiting: SecondMuse Capital.

About the One Million Black Women Initiative:

In partnership with Black-women-led organizations, financial institutions and other partners, Goldman Sachs has committed $10 billion in direct investment capital and $100 million in philanthropic capital over the next decade to address the dual disproportionate gender and racial biases that Black women have faced for generations, which have only been exacerbated by the pandemic. The initiative, One Million Black Women, is named for and guided by the goal of impacting the lives of at least one million Black women by 2030. Goldman Sachs’ research Black Womenomics has shown that sustained investments in Black women will catalyze economic growth, making for not only a fairer, but also a richer society.

The Goldman Sachs Group, Inc. is a leading global financial institution that delivers a broad range of financial services across investment banking, securities, investment management and consumer banking to a large and diversified client base that includes corporations, financial institutions, governments and individuals. Founded in 1869, the firm is headquartered in New York and maintains offices in all major financial centers around the world.

Save the date for a virtual celebration, centering Girls of Color* in reproductive...
Scroll to top