From Invisible to Invincible

You are here: Home / Resources / Updates and Newsletters / From Invisible to Invincible 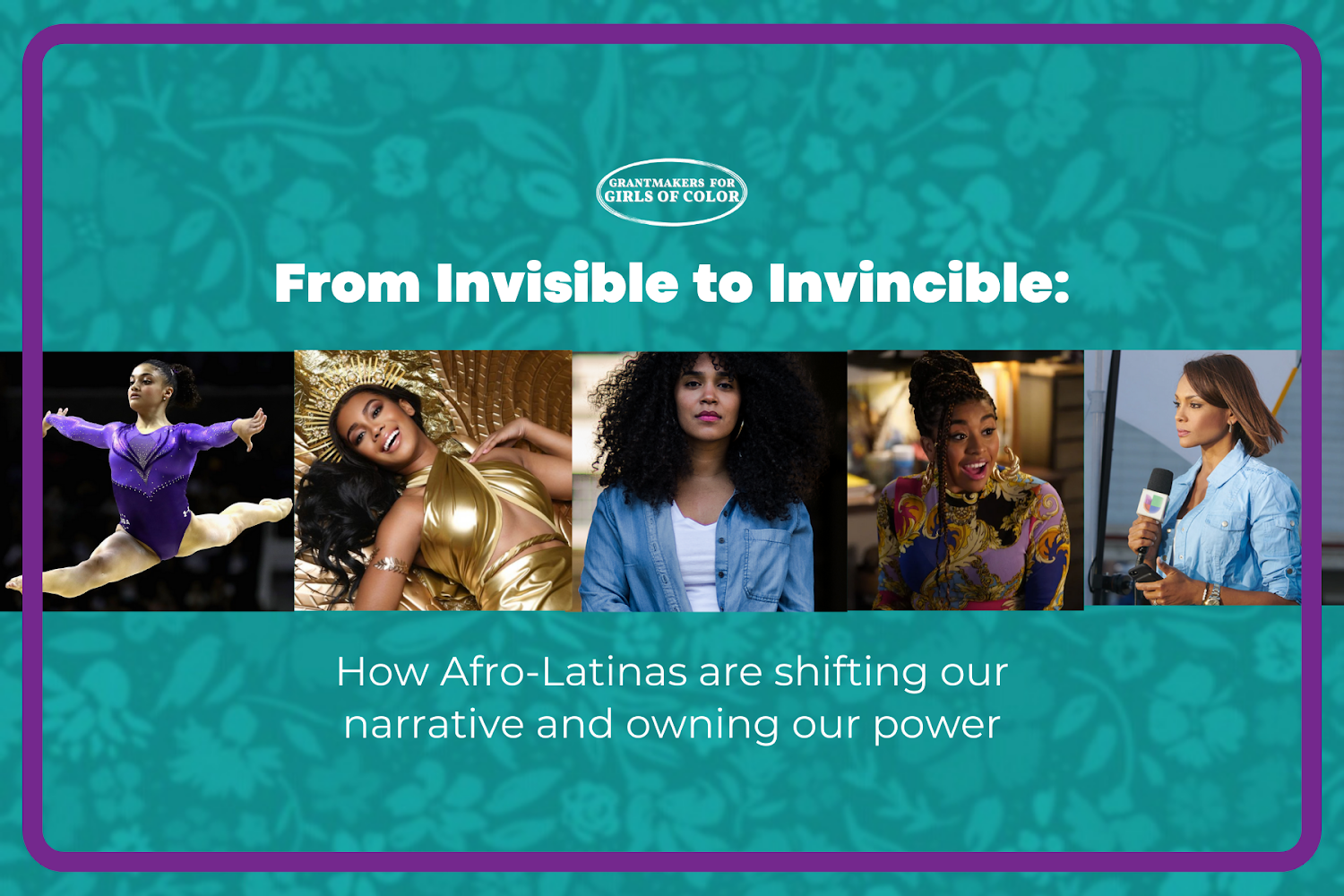 From Invisible to Invincible

How Afro-Latinas are shifting our narrative and owning our power

Now is the essential time for a narrative shift about Afro-Latinas, one that recognizes their contributions and impact to all aspects of our society, and halts the public consciousness that has for too long rendered them invisible. As Caribbean American poet Aja Monet so beautifully expresses in her poem ‘My Mother Was a Freedom Fighter’:

“…how we see ourselves

is determined by five western countries

five of which determine

value by how well they kill

and we out here screaming

i am starting to believe

that this is all we value

is each other’s death

We want to recognize what it means to be part of the Black diaspora, and the significance of this moment in time where we are in solidarity to recognize the intersectionalities that uniquely exist for Afro-Latina girls and gender-expansive youth. The Afro-Latinas living in our midst deserve to be celebrated and elevated, not erased and dismissed. We are dedicated to continuing to cultivate investments on their behalf, and as we seek to engage a new way forward, we must first address the erasure that has been perpetuated against them. Collectively, we need to do better.

At Grantmakers for Girls of Color (G4GC)  we are engaging a new way forward through our Black Girl Freedom Fund, created a year ago on August, 2020, along with the #1Billion4BlackGirls campaign that calls for $1 billion for Black girls over the next 10 years. This fund reflects the beautiful spectrum of Black girls in the U.S., from African-American, African, Afro-Caribbean and Afro-Latina to those who identify as Black in combination with any other racial or ethnic group. Our commitment  is to grow an organization that fosters community and honors the intersections of the diverse identities of girls and gender-expansive youth of color. In a world where anti-Blackness is rampant and deeply ingrained in societal behaviors, and institutional policies and practices, it was important for us to create a space where Afro-Latinas could gather and proudly affirm their Black and Latinx identities while also speaking their truth.

This is why across our programming and our grantmaking, we are choosing to resource girls’ leadership, power, and joy across a range of issues and movements, rather than structuring our grantmaking in a way that forces girls to choose one of their many identities or to downplay their full experience.

One Afro-Latina working to lift her people up is Amy Rodriguez of South Central Los Angeles, who launched @AfroLatinaStandUp, a brand and movement that encourages, educates, and gives a voice to Afro Latinas. Rodriguez—a South Central Los Angelian with a Caribbean mother with Belizean roots and raised in Guatemalan culture—created the initiative to empower other Afro-Latinas to embrace their heritage.

The Pew Research Center estimates that one-fourth of all U.S. Latinos self-identify as Afro-Latino, Afro-Caribbean or are of African descent. This population reflects the many dimensions of identity among the U.S. Latino communities, as well as the legacy of colonialism and slavery in the United States and Latin America. But it is a population that our society has largely ignored or misunderstood.

The problem is that in much of our public rhetoric and consciousness about who is Latino or Black, we often render those who are both Latino and Black as invisible. When writing on the hierarchy of Latinidad, Janel Martinez, Afro-Latina and founder of Ain’t I Latina, says, “Though positioned as an all-inclusive cultural identity, Latinidad has historically proven to be a term beneficial to a select few. Gauging one’s proximity to whiteness—gender, sexual preference and able-bodied privileges included—Latinidad incites the question, who is included and, ultimately, excluded from its definition?” For far too long that answer has been Afro-Latinas.

When writing about the importance of uplifting Afro-Latinos, Puerto Rican scholar and author Miriam Jiménez Román says, “It is important because, for the most part, we are invisible. We are invisible because when people speak of Latinos, they have in mind a particular stereotype of Latinos – physically, culturally, racially – and that doesn’t necessarily match our reality.”

In order to actively combat the invisibilization of Afro-Latinas, we must start by centering their diverse identities. When we center the lived experiences of Afro-Latinas, we are forced to confront the erasure, victimization, and discrimination that occur in their lives. Partnered with that confrontation is an invitation for us to develop a critical response that disrupts both the internalized and externalized oppression facing Afro-Latina youth. Undoubtedly, our critical response must recognize that the duality of the Afro-Latina identity makes them the natural bridge that we need to lead us to restructuring limiting paradigms. They are our leaders to a more just future.

We must also name the fact that whenever there is erasure and invisibilization, it has devastating impacts on the well-being of the group that is being erased. According to Pew, about six in 10 Afro-Latinos had family incomes below $30,000 annually, compared to about half of Latinos who do not identify as Afro-Latino. Research also suggests that Black Latinos report higher levels of various health problems than white Latinos, including hypertension and depression.

The reasons for these disparities are fairly straightforward: Black Latinos who are immigrants often struggle with the challenges facing all U.S. immigrants, from language barriers to discrimination and inequity in access to education, healthcare, good jobs, and more. Black Latinos are also subject to the same systemic discrimination facing all Black Americans. Add in the gender discrimination and invisibility facing girls of color across this country, and we see that Black Latina girls are facing a connected web of harm stemming from the ignorance that renders their invisibility.

Whether in our culture, our discourse, our data-gathering, or our philanthropy, we simply must do a better job reflecting the reality of Afro-Latinas. Thanks to the work of Kimberlé Crenshaw, we now have language that illuminates how intersecting factors such as race, class, gender identity, and sexual orientation contribute to marginalization. When we interrogate our investments through the lens of intersectionality, it becomes increasingly clear who we are thinking of, and who we are not.

A study by the Ms. Foundation reveals that the “total philanthropic giving to women and girls of color is just $5.48 per year for each woman or girl of color in the United States, accounting for just 0.5% of the total $66.9 billion given by foundations.” Philanthropy cannot, and should not, be a party to perpetuating the erasure of Afro-Latinas, but the sobering revelation that less than 1% is all that women and girls of color receive, is catalyst that fuels our mission to change this, and create abundance for Afro-Latinas and other girls of color.

Many of us are working on and care about issues affecting Black and Latino communities, but seldom pay attention to the intersectional challenges facing those who straddle both of those worlds, and particularly with a gender lens. We are starting conversations and casting a light on this, and challenge philanthropy to join us so we can collectively do better. As a Black leader in philanthropy, and an Afro-Latina leader in philanthropy, we are recognizing the intersectional challenges and deeply investing in uplifting Afro-Latina girls.

As a society, we can begin shifting the exclusionary narrative by centering, celebrating, and elevating the power, joy, and leadership of Afro-Latinas. Doing so requires us to see and embrace them in their fullness, and combat the erasure that has been perpetuated against them for far too long. To see Afro-Latinas thrive, we must begin centering their needs and voices, and refuse to recognize them only through lacking our data. The onus is on us to collectively create safe spaces for Afro-Latinas to explore their diverse identities, and confidently thrive in their intersectionality.

What we need to do is listen. We’re fortunate to have legions of powerful Afro-Latinas telling us that “our stories cannot be checked into boxes” like Afro-Dominican New York Times-bestselling author Elizabeth Acevedo who proudly owns her identity, and has been an integral contributor to our societal narrative shift. She is speaking to young  Afro-Latinas, giving them permission to affirm their diverse, intersectional identities through like in her poem “Afro-Latina” :

“We are the sons

Leticia Peguero has been a philanthropy professional for over 15 years and was most recently the Vice President at the Nathan Cummings Foundation. She has developed strategies for numerous philanthropic organizations that serve historically marginalized communities to achieve racial, economic and environmental justice. She recently launched a coaching and consulting firm focusing on working with communities of color to develop values based strategies. Leticia is on the Board of Directors at Grantmakers for Girls of Color.

The Takeaway: The Importance of Mentoring for Black Girls
Scroll to top